T-Mobile has basically chosen 2.5 GHz spectrum as the main network for its 5G service. This decision is a countermeasure against Verizon securing a 3.5 GHz band and strengthening its investment.
These decisions indicate that the U.S. just like South Korea are choosing mid-bands (1 to 6 GHz) as the main 5G frequency.
T-Mobile announced its “5G Layer Cake” strategy that establishes 2.5 GHz band coverage in more than 1,000 cities nationwide by the end of this year and utilizes the coverage as the main 5G frequency.
The company’s strategy is to divide 5G networks into 600 MHz (low band), 2.5 GHz (mid band), and 28 GHz and 39 GHz (high band) and separate locations and uses of its service depending on frequency characteristics.
2.5 GHz band is perfect for providing 5G performance and coverage at the same time. It has an average speed of 300 Mbps and a maximum transmission speed of 1 gigabit per second and it provides a high-performance network that is 7.5 times higher than that of current LTE in an area that is wide as possible daily. T-Mobile has doubled the current number of areas where 2.5 GHz service is serviceable to 410 and it plans to increase the number to 1,000 by the end of this year.
Although its 600 MHz service, which is its major network at the moment, has a slow speed, it will be given a role of providing a service base to enable 5G communication to 250 million people.
High bands such as the 28 GHz and 39 GHz bands, which have yet to receive much attention, will be used to build networks around narrow and dense city blocks. They will be limited to B2B (Business to Business) services and transmission of ultra-high-speed media considering the fact that radio waves can be easily cut off by obstacles such as trees, windows, and buildings.
South Korea’s mobile telecommunications operators believe that the recent move by T-Mobile is a proof that competitions within the mobile telecommunications market in the U.S. are shifting towards the mid-band. 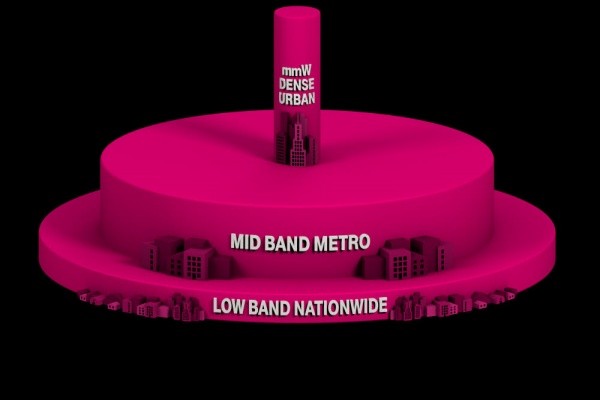 In the U.S., there was a case where T-Mobile and Verizon reported each other regarding the qualities of their 5G frequencies. As a result, T-Mobile cannot use the word “reliability” in its advertisements regarding its 5G service based on the 600 MHz band. For Verizon, it cannot use the word “national network” when it comes to its 28 GHz band. Since then, Verizon invested about $1.9 billion to win the 3.5 GHz band and it has started making investments into the band.
Ultimately, both companies had no choice but to use mid-bands, which provide reasonable coverages and high-speed communication performance, as their core networks.
While the American mobile telecommunications operators will compete against each other using their mid-bands, they will use low-band or high-band frequencies as supplementary purposes such as B2B service. It is similar to how South Korean mobile telecommunications operators are using the 3.5 GHz band as nationwide networks and the 28 GHz band as networks specialized for B2B service.
In fact, the mid-band is starting to become the main 5G frequency around the globe.
According to the World Mobile Telecommunications Providers Association (GSA), 188 mobile telecommunications operators obtained 5G licenses in the C-band (3.3 to 4.2 GHz), and 90 of them have already established networks or are in the process of establishing networks. 36 companies obtained licenses in the 2.6 GHz band, and around 10 of them have begun working on establishing actual networks.
On the other hand, while 130 companies obtained licenses in the case of the 24.25 to 29.5 GHz band, which is a millimeter wave and an ultra-high band, only 22 of them have actually built networks.
“It is almost impossible to use every frequency from 5G network as a nationwide network.” said a representative from a mobile telecommunications operator. “How T-Mobile is organizing a portfolio depending on frequency characteristics, technology, and market demands and building its networks will become a trend.”
Meanwhile, the GSA classifies 5G frequencies that are lower than 1 GHz as low bands, 5G frequencies that are between 1 and 6 GHz as mid bands, ang 5G frequencies that are higher than 6 GHz as high bands.